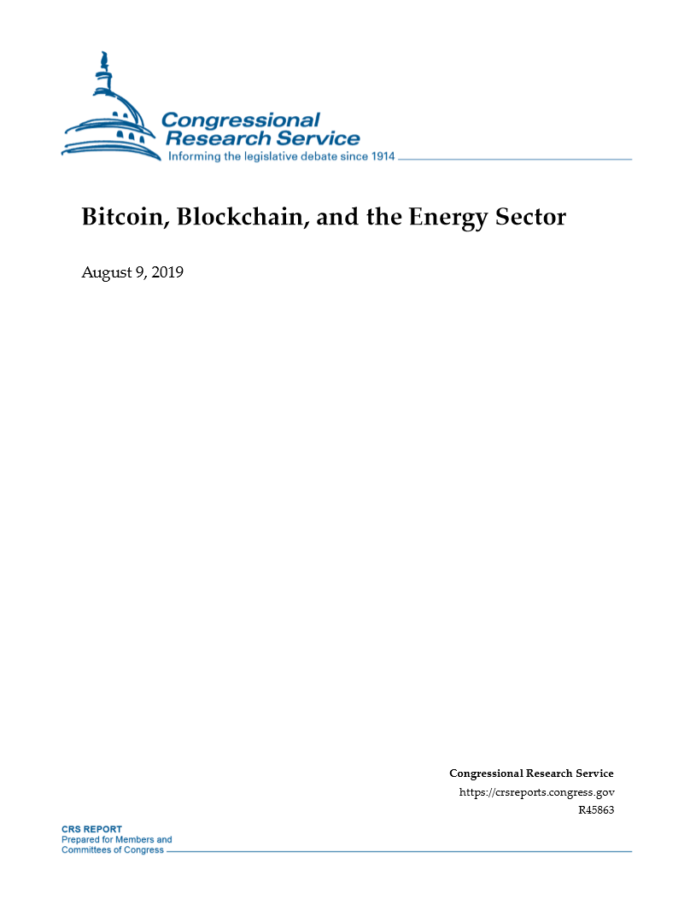 Bitcoin and other cryptocurrencies can be used to make payments without banks or other third-party intermediaries, and are sometimes considered virtual currency. The technology underlying these cryptocurrencies is blockchain. A blockchain is a digital distributed ledger that enables parties who may not otherwise trust one another to agree on the current ownership and distribution of assets in order to conduct new business. New blocks may be added to a blockchain through a variety of methods. In mining blocks, users seek to add the next block to the chain. For Bitcoin, new blocks are added to the blockchain through a proof-of-work (PoW) algorithm. Under PoW, miners—those seeking to add a block to a blockchain—are presented a difficult computational problem. Once the problem is solved, other users can validate the solution and confirm the block, adding the next block to the chain. In the case of Bitcoin, miners who create and publish new blocks are rewarded with Bitcoin. Less energy intensive, alternative algorithms exist, such as proof of stake and proof of authority.

Cryptocurrency mining through PoW requires substantial energy to (1) operate the devices computing the calculations required to maintain the integrity of the blockchain and (2) thermally regulate the devices for optimal operation. Devices have different performance capabilities and have different power requirements. Generally, the device, or a cluster of devices, that can perform more calculations per second will require more energy for powering and cooling the device or devices. Global power requirement estimates for Bitcoin have increased within the last five years. Network power estimates for 2018 range between 2,500 megawatts (MW) and 7,670 MW, which, for comparison, is nearly 1% of U.S. electricity generating capacity. Opinions differ on whether future growth in Bitcoin will significantly impact energy consumption and subsequent carbon dioxide (CO2) emissions.

Cryptocurrency mining includes costs associated with equipment, facilities, labor, and electricity. Some users pool computational resources to solve PoW problems faster, and are on a worldwide hunt for cheap, reliable electricity in abundance. While many mining pools are in China, some have been able to utilize closed industrial facilities in the United States that can provide abundant electricity at affordable rates. According to a study in 2017, nearly three-quarters of all major mining pools are based in either China (58%) or in the United States (16%). By some estimates, the state of Washington hosted 15%-30% of all Bitcoin mining operations globally in 2018. Governments are developing various policies in response to growth in energy demand by cryptocurrency mining activities. In some areas, applications from potential mining companies have exceeded the available capacity. Other areas have offered reduced electricity rates to attract miners. In the United States, in addition to efforts at the state and local level, there are potential options that could be adopted by the federal government to improve the energy efficiency of mining operations. Potential federal policy options include minimum energy conservation standards, voluntary energy efficiency standards, and data center energy efficiency standards.

In addition to the challenges that cryptocurrency mining presents to the energy sector, there are also opportunities, particularly for blockchain. These may include electric vehicle charging infrastructure and distributed energy resources, among others. The U.S. electricity grid is critical infrastructure and subject to certain regulations to maintain safe and reliable operations. Opinions differ as to a potential role for blockchain technology in the energy sector.R45863