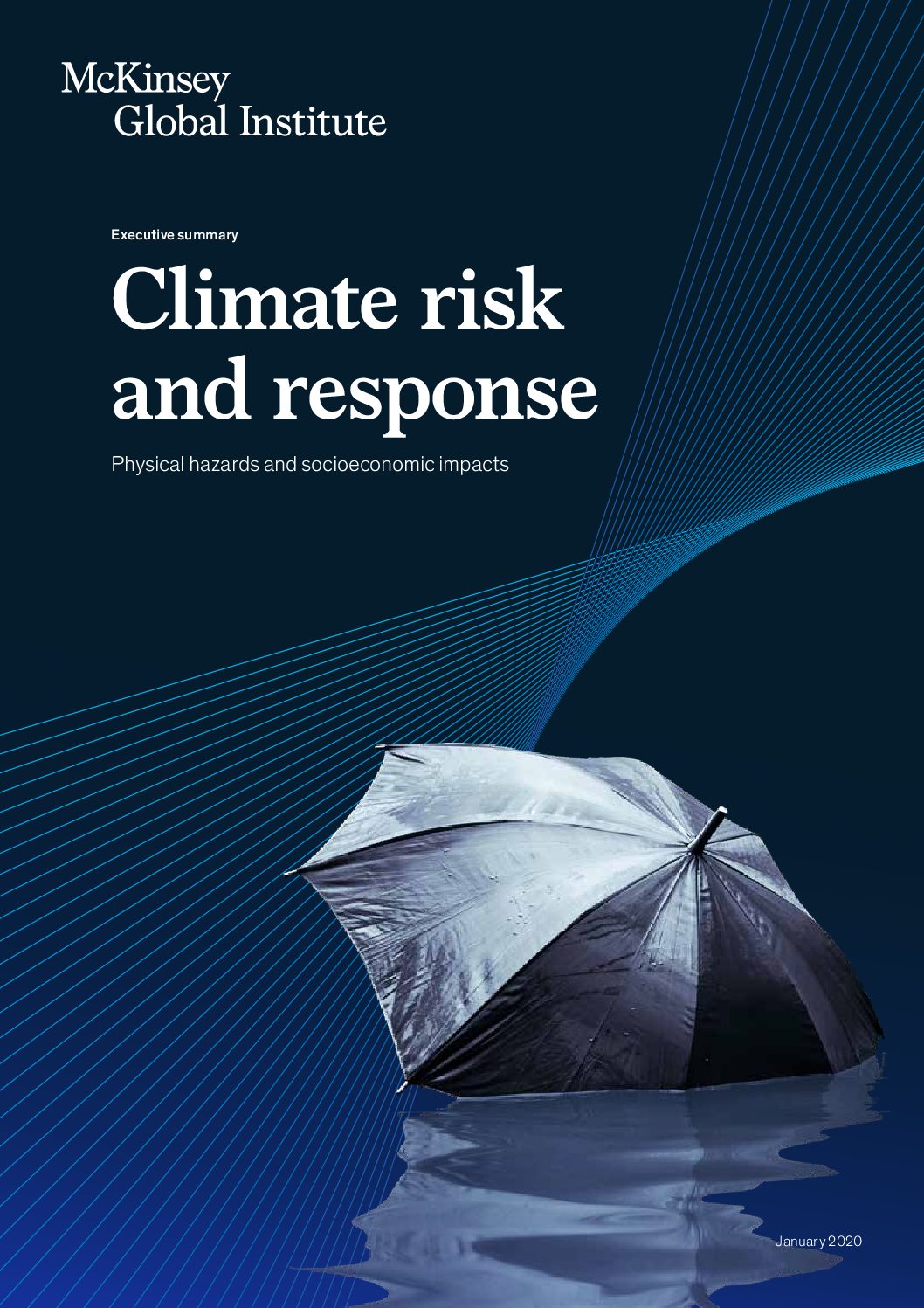 After more than 10,000 years of relative stability—the full span of human civilization—the Earth’s climate is changing. As average temperatures rise, acute hazards such as heat waves and floods grow in frequency and severity, and chronic hazards, such as drought and rising sea levels, intensify. Here we focus on understanding the nature and extent of physical risk from a changing climate over the next three decades, exploring physical risk as it is the basis of both transition and liability risks. We estimate inherent physical risk, absent adaptation and mitigation, to assess the magnitude of the challenge and highlight the case for action. Climate science makes extensive use of scenarios ranging from lower (Representative Concentration Pathway 2.6) to higher (RCP 8.5) CO2 concentrations. We have chosen to focus on RCP 8.5, because the higher-emission scenario it portrays enables us to assess physical risk in the absence of further decarbonization. We link climate models with economic projections to examine nine cases that illustrate exposure to climate change extremes and proximity to physical thresholds. A separate geospatial assessment examines six indicators to assess potential socioeconomic impact in 105 countries. The research also provides decision makers with a new framework and methodology to estimate risks in their own specific context. Key findings:

Climate change is already having substantial physical impacts at a local level in regions across the world; the affected regions will continue to grow in number and size. Since the 1880s, the average global temperature has risen by about 1.1 degrees Celsius with significant regional variations. This brings higher probabilities of extreme temperatures and an intensification of hazards. A changing climate in the next decade, and probably beyond, means the number and size of regions affected by substantial physical impacts will continue to grow. This will have direct effects on five socioeconomic systems: livability and workability, food systems, physical assets, infrastructure services, and natural capital.

The socioeconomic impacts of climate change will likely be nonlinear as system thresholds are breached and have knock-on effects. Most of the past increase in direct impact from hazards has come from greater exposure to hazards versus increases in their mean and tail intensity. In the future, hazard intensification will likely assume a greater role. Societies and systems most at risk are close to physical and biological thresholds. For example, as heat and humidity increase in India, by 2030 under an RCP 8.5 scenario, between 160 million and 200 million people could live in regions with an average 5 percent annual probability of experiencing a heat wave that exceeds the survivability threshold for a healthy human being, absent an adaptation response. Ocean warming could reduce fish catches, affecting the livelihoods of 650 million to 800 million people who rely on fishing revenue. In Ho Chi Minh City, direct infrastructure damage from a 100-year flood could rise from about $200 million to $300 million today to $500 million to $1 billion by 2050, while knock-on costs could rise from $100 million to $400 million to between $1.5 billion and $8.5 billion.

The global socioeconomic impacts of climate change could be substantial as a changing climate affects human beings, as well as physical and natural capital. By 2030, all 105 countries examined could experience an increase in at least one of the six indicators of socioeconomic impact we identify. By 2050, under an RCP 8.5 scenario, the number of people living in areas with a non-zero chance of lethal heat waves would rise from zero today to between 700 million and 1.2 billion (not factoring in air conditioner penetration). The average share of annual outdoor working hours lost due to extreme heat and humidity in exposed regions globally would increase from 10 percent today to 15 to 20 percent by 2050. The land area experiencing a shift in climate classification compared with 1901–25 would increase from about 25 percent today to roughly 45 percent.

Financial markets could bring forward risk recognition in affected regions, with consequences for capital allocation and insurance. Greater understanding of climate risk could make long-duration borrowing unavailable, impact insurance cost and availability, and reduce terminal values. This could trigger capital reallocation and asset repricing. In Florida, for example, estimates based on past trends suggest that losses from flooding could devalue exposed homes by $30 billion to $80 billion, or about 15 to 35 percent, by 2050, all else being equal.

Countries and regions with lower per capita GDP levels are generally more at risk. Poorer regions often have climates that are closer to physical thresholds. They rely more on outdoor work and natural capital and have less financial means to adapt quickly. Climate change could also benefit some countries; for example, crop yields could improve in Canada.

Addressing physical climate risk will require more systematic risk management, accelerating adaptation, and decarbonization. Decision makers will need to translate climate science insights into potential physical and financial damages, through systematic risk management and robust modeling recognizing the limitations of past data. Adaptation can help manage risks, even though this could prove costly for affected regions and entail hard choices. Preparations for adaptation—whether seawalls, cooling shelters, or droughtresistant crops—will need collective attention, particularly about where to invest versus retreat. While adaptation is now urgent and there are many adaptation opportunities, climate science tells us that further warming and risk increase can only be stopped by achieving zero net greenhouse gas emissions.