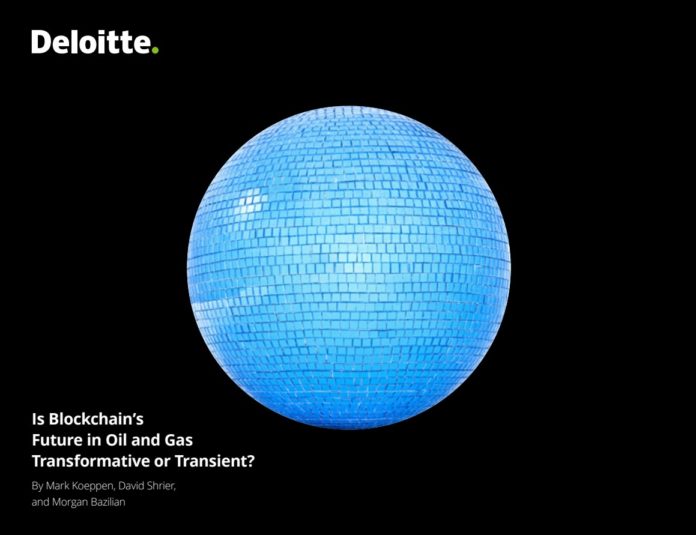 Distributed ledger technology, commonly known as blockchain, has its roots in the online currency Bitcoin. But blockchain is growing beyond its currency origins, making inroads into the financial services and tech industries toward improvements in operations and finance.

Is blockchain ready for prime time in the oil and gas industry? Is it hype—or a genuine agent of change? The jury is out. Some executives recognize its potential for reshaping their business. Others express concern about disruption, unsure if the future benefits will outweigh the risk and investment demands of being a first mover. More than a few have little or no knowledge of the possibilities—or they may believe that alternate solutions such as robotics and cognitive technology are superior solutions to their current challenges.

In a survey commissioned by Deloitte in late 2016, nearly two in five senior executives surveyed at large U.S. companies across industries had little or no knowledge about blockchain technology. While 55 percent of respondents said they believed their companies would be at a competitive disadvantage without it, 42 percent acknowledge its disruptive potential.

To date, the technology has had little impact on the oil and gas industry, providing a small frame of reference for oil executives to adequately assess its current and future value. But given the data-intensive opportunities available through the growth and expansion of the Internet of Things, blockchain could be an important vessel to carry the industry’s data transformation forward.

One element of this new technology that can bind skeptics and true believers is the potential of blockchain as a means of simplifying processes that can lead to enhanced efficiency and cost reductions. Blockchain can offer transactional verification instantly across a network, without relying on a central authority— potentially reducing operating costs, more securely storing and managing data, and improving the speed of transaction processing.

That’s the big picture, and some major global players are already hopping on board. For example, the global petroleum and mining company BHP Billiton announced at the second annual Global Blockchain Summit in Shanghai last September that it would start using the technology to enhance supply chain efficiency, better secure real-time data generated during delivery, and create a chain of order requests connecting engineers, analysts, and laboratories, according to Bitcoin Magazine and other media accounts.

Supply chain is often a good place to start in assessing practical value. Companies could forge new agreements with producers, suppliers, financial experts, record-keeping departments, and thirdparty vendors, potentially leading to reduced costs, streamlined management and a clearer understanding of the assignments and expectations of each player on the field.

Innovation isn’t just about influencing existing business models in a positive and productive way. It’s also about how to monetize new ideas. Oil and gas companies have struggled through price volatility and record production levels in recent years, often leading to massive cost-cutting efforts, reduced exploration, and layoffs. This has forced oil and gas companies to drastically rethink how they operate and identify innovative ways to improve transaction processing.