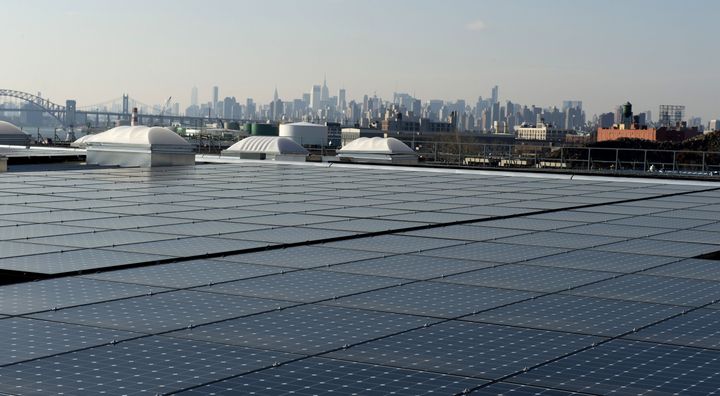 Still traumatized by 2012’s deadly Superstorm Sandy, New York City has in recent years sued oil giants, divested its pension funds of coal stocks, and outlined lofty plans to protect the coastal metropolis from rising seas and extreme weather. Yet this year the nation’s largest city became more dependent on fossil fuels for its electricity as the nuclear plant that provided most of its zero-carbon electricity shut down and a plan to build a transmission line to carry hydropower down to the Hudson River from dams in Canada, first proposed in 2008, continued to flounder. With limited space to build renewables and political power over its own infrastructure, glazing rooftops across the five boroughs with solar panels is widely seen as the easiest and most affordable way to generate renewable power within city limits ― and a source of jobs and training for an industry set for exponential growth if the U.S. fulfills its climate goals. But two looming policy changes threaten to make rooftop solar harder and more expensive to build.

The state program that financed solar projects on the roofs of some of the poorest and most pollution-plagued New Yorkers is poised to run out of money as early as the end of summer, in part because a loophole allowed fossil fuel infrastructure to use up a giant chunk of the funding. And the city’s fire department advanced new codes that could significantly shrink the amount of roof space available for solar equipment and create costly new requirements for building owners looking to add panels. “There’s no pot at the end of the rainbow for people building and installing solar in New York City,” said Shyam Mehta, the executive director of the New York Solar Energy Industries Association. “It’s very difficult already. These policy issues make it more so.”

New York state created its community solar program in 2015 to subsidize the construction of panels to which renters, barred from building […]